How social technologies are extending the organisation

The following article is my view on the best bits from the McKinsey Global Institute fifth annual survey. Full report can be found on my SlideShare.

Companies are realising that social technologies are changing the way clients interact. As a result they no MUST incorporate these to enhance and exploit opportunities. There are both opportunities to improve internal process’s and also to explore new markets.

Seventy two percent of respondents are deploying at least one technology and more than 40  percent are now incorporating blogs and networking tools.

86 percent of companies are in high tech and telecommunications. 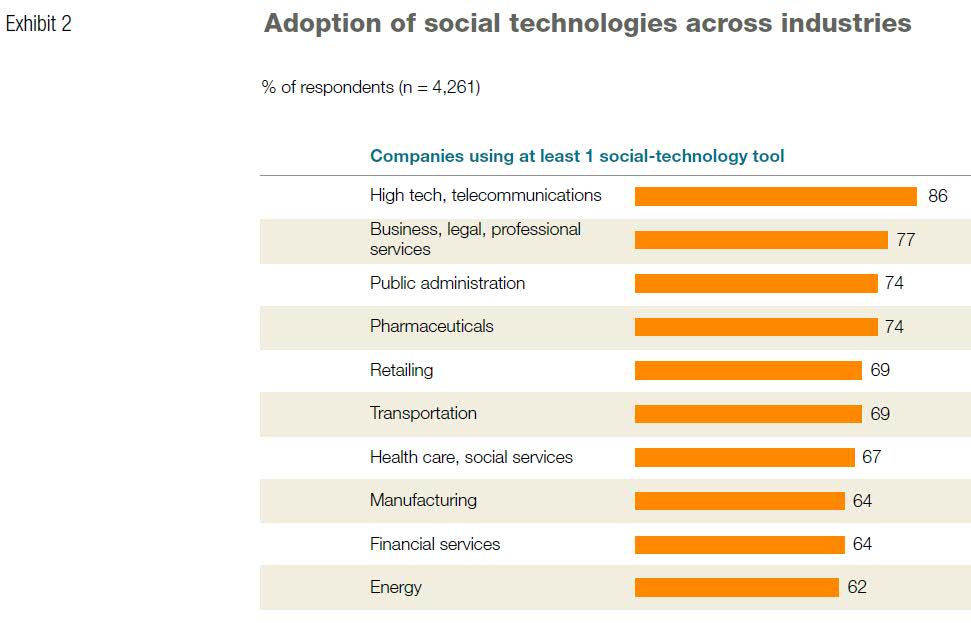 Another key performance measure, self reported operating-margin improvements, correlated positively with the reported percentage of employees whose use of social technologies was integrated into their day-to-day work.

6 Things You Must Know About Social Media and Your Workforce

By Eric B. Meye

Cisco just completed this study, which shows just how much social media, device freedom, and mobile work means to the next generation.

Thinking about banning social media in the workplace? Before you flip the kill switch, read this:

More than half of students (55 percent) and an even larger proportion of end users (62 percent) indicate they could not live without the Internet; and one-third of respondents in each subgroup consider the Internet to be as important as water, food, air, and shelter.
Half of those surveyed would rather lose their wallet or purse than their smart phone or mobile device.
More than two out of five 20-somethings would accept a lower-paying job that offered more choices in the device they use at work, social media access, and mobility compared with a higher-paying job with less flexibility.

Can you handle a productivity hit?

So it would appear that your young workforce seemingly can’t live without a Facebook fix. But can you handle the productivity hit? Consider these numbers:

Nearly three quarters of your young college-educated workforce indicate accessing their Facebook page at least once a day or more frequently. 1 in 10 have their Facebook pages up all day.
Seven in ten young college-educated employees have friended a co-worker, manager, or both on Facebook.
Approximately 43 percent of college students admit being distracted or interrupted by social media, IM, phone, or a desire to check Facebook, at least three times per hour.

Whatever your position on social media in the workplace, address it at the job interview.

The reality is that even if you restrict network access to social media, employees — young and old — are going to whip out their smartphones and hit up Facebook, Twitter and the Internet.
A question for the job interview

Obviously, each company has to decide for itself, whether employee use of social media is a good thing for business, a bad thing for business, or no thing at all. For those who consider it a bad thing, consider asking about social-media usage during the job interview. If you don’t bring it up, expect that college-grad candidate to broach the subject. The Cisco study indicates that two-thirds of college grads ask about social-media policies in job interviews.

When the topic of social media comes up, don’t ask candidates for their social-media logins and passwords to access to their private sites. That shows a complete lack of trust and, frankly, a candidate who takes precautions to protect what they post on the Internet from your eyes shows good judgment.

But, much like candidates will want to know whether Facebook at the office is feasible or firewalled, you should ask questions about the quantity — not quality — of social-media use. This will help you to determine whether these candidates, if hired, will devote more time in the office to work versus commenting on Facebook from work about workr

Sales driven by social media, and mobile retail are both set to play a bigger role in this year’s Christmas shopping season according to the IBM Coremetrics 2011 UK Christmas Season Readiness Report.

Using data gathered from more than 150 contributing UK retailers, IBM predicts that mobile traffic as a percentage of all retail site visits will hit double figures by Christmas 2011, having grown from just over 4 per cent to 7.2 per cent between November 2010 and May 2011. In the same time period, the contribution of mobile as a per cent of all online site sales nearly doubled, from 3.2 per cent to 6.1 per cent, which suggests further growth for mobile as a sales channel is likely in the run-up to Christmas.

The benchmark also found that mobile users exhibit a trend for fewer page views (5.8 compared with an average of 8.4, across all means of going online), spend less time on websites (4 minutes and 13 seconds, versus 6 minutes and 24 seconds across all means of going online) and display higher bounce rates to other sites (39.6 per cent compared with 32.8 per cent).

“Despite the attractiveness of engaging with customers on the move, mobile brings with it unique considerations and challenges,” said Marcel Holsheimer, global marketing executive for Enterprise Marketing Management (EMM) for IBM. “Using a mobile device to browse, compare prices, check availability and store locations or make a purchase is convenient for the consumer, which can translate into significant conversion opportunities – but only if the etailer delivers a compelling mobile experience. Etailers therefore need to monitor and optimise the mobile browsing experience to counteract mobile users’ tendency for short and erratic periods online.”

From a social media perspective, users behave in a more efficient manner in terms of sales conversion. They are twice as likely to convert, at an average rate of 11 per cent versus 6 per cent overall. This conversion rate, when viewed in conjunction with other behaviour, also suggests social users are more receptive to offers. Their high bounce rate of nearly 62 per cent, coupled with a low average time spent  on the websites of just over 3 minutes, suggests they are responding to social media-only offers – such as Facebook coupons or exclusive offers advertised on Twitter.

“With the recession still very much front of mind, many savvy e-shopper are buying surgically,” said Holsheimer, “They know what they want and can hone in on it with far less browsing than in previous years. Smart etailers still have time to step up and expand their mobile and social networking platforms in time for this year’s festive season, as way to deepen engagement with their prized customers, strengthen their long-term loyalty – and, convert sales via the customer’s personal channel of choice.”

The findings in this press release is based on data collected by Coremetrics Benchmark between November 2010 and May 2011. Coremetrics Benchamrk captures online marketing results and commerce data from more than 150 contributing UK retailers.

IBM study: 68% of global CMOs are ‘under prepared’ to manage social media

According to IBM‘s new, inaugural Global Chief Marketing Officer (CMO) Study, 68% of CMO’s are under prepared to manage the impact of key changes in the marketing arena that relate to social media.

The survey, based on face-to-face conversations with more than 1,700 CMOs worldwide, highlighted that CMOs see four challenges as pervasive, universal game-changers in the world of marketing:

1.The explosion of data
2. Social media
3. The proliferation of channels and devices
4. Shifting consumer demographics.

When it comes to social media, CMO’s are acutely aware that social media is challenging older, mass-marketing assumptions, skill sets and approaches, and while the most proactive CMO’s are mining new digital data sources to discover what individual customers want, relatively few CMO’s are exploiting the full power of the digital or social media.  In fact, only three-quarters use customer analytics to mine data, only 26% track blogs, only 42% track third-party reviews and only 48% are tracking consumer reviews. The reasons behind this are attributed to the fact that the tools, processes and metrics that CMO’s are using are not designed to capture and evaluate the unstructured data produced by social platforms.

More than half of all CMO’s think social media is a key channel for engaging with customers and four-fifths of respondents plan to use customer analytics, customer relationship management (CRM), social media and mobile applications more extensively over the next three to five years.

Of the top 10 priorities for managing the shift to digital technologies, 4 relate directly to social media, with another 3 potentially being impacted by social media. It’s also interesting to note that social media metrics appear as one  of seven important measures for gauging marketing success – two years ago this would never have been the case.

The fact that so many global CMO’s are concerned about the impact of social media, and how they are going to resource, manage, analyse and measure it, highlights that social media is finally moving beyond the numbers of views or fans on various channels. CMO’s are starting to realise that social media can help achieve strategic objectives and transform their business if they invest in the right resource and planning and set metrics that match their key business goals.