How to Measure Productivity at Your Office

Unless you work in a factory where output is a definable quantity, then measuring how productive you — or your fellow employees — are is a difficult task. That’s because so much of what we do doesn’t have a definite quantity. If you’re in an office and you work in customer service, you can’t just measure how many calls someone might take. A customer service rep might handle fewer calls, but the problems might be more difficult, the solutions might be more thoughtful, and the end result might be customers that start unhappy and leave satisfied. So how then, do you think about productivity in a twenty-first century way?

For starters, you do have to have a baseline, and that baseline might be something akin to an industry average. But that baseline probably shouldn’t be tied to days. What else matters for a modern productivity measurement? This graphic explains it.

Measuring productivity is a process of comparison: You compare how much an employee or a team produces, in relationship to how little would be produced if team members didn’t inhabit their respective roles. Sometimes you compare a given employee’s productivity directly against the productivity of an employee in a similar role. Other times, you compare your team’s results to industry averages. In order to make these comparisons, you first need to establish a baseline of whatever it is you’re comparing to.

For example, if you run a sales team or call center, you could divide the average number of daily sales or customer calls by the number of employees to determine how many calls each of your employees averages each day. You can then use this as a baseline to determine who is fielding more or less than the average. (Of course, the baseline shouldn’t be the end-all, be-all to determine a team member’s productivity—after all, quantity rarely beats quality.)

This process can get trickier if you work in a more administrative setting where each employee has a different role and their tasks are less quantifiable. In these cases, it’s still important to establish a baseline. For example, you may consider breaking projects into assigned tasks so you can track how well employees stay on top of their work (more on that in the next tip).

No matter how you determine a baseline, try to avoid using the number of hours worked, the number of sick days taken, or the number of vacation days used. These metrics don’t necessarily have any relation to the quality or effectiveness of a given employee’s work. 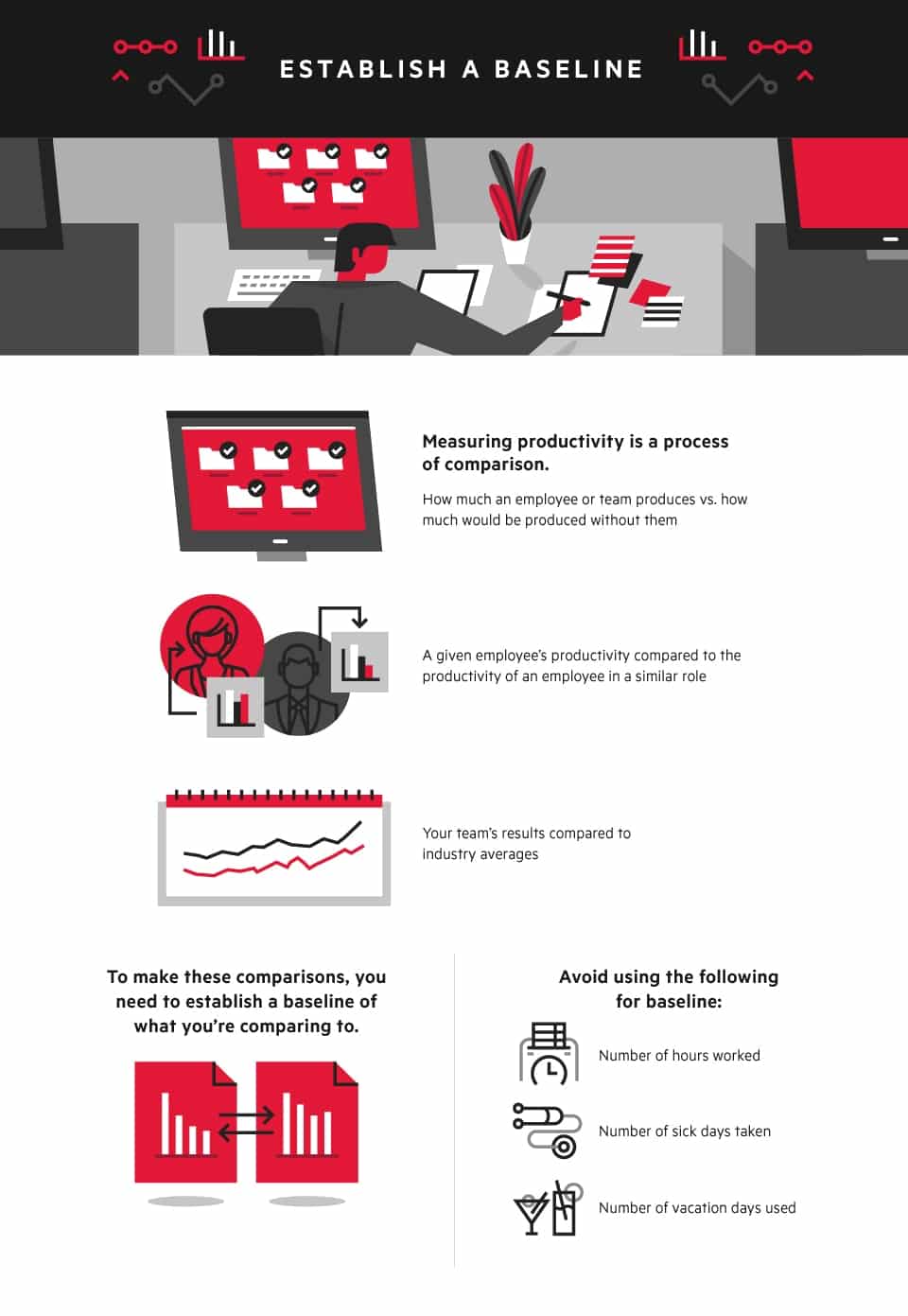 A simple way to measure productivity is to clearly define tasks and then track whether, and with what expediency, those tasks are completed.

This is a great way to make sure you don’t fall into the micromanaging trap because it focuses more on outcomes than it does on the minutiae of daily responsibilities. It also allows you to measure employees’ ability to meet deadlines, which can be a useful performance metric. Just make sure you don’t simply assign tasks for the tasks’ sake. Tasks should offer real value to the company for them to have significance as a performance indicator.

One other caveat: Using tasks to track productivity requires that those tasks be assigned effectively in the first place. Make sure managers communicate exactly what deliverables are expected for a certain assignment and when those deliverables are due, as well as any other information relevant to completing the task effectively and efficiently. Only when this information has been provided is it reasonable to expect a team member to follow through on the assignment. 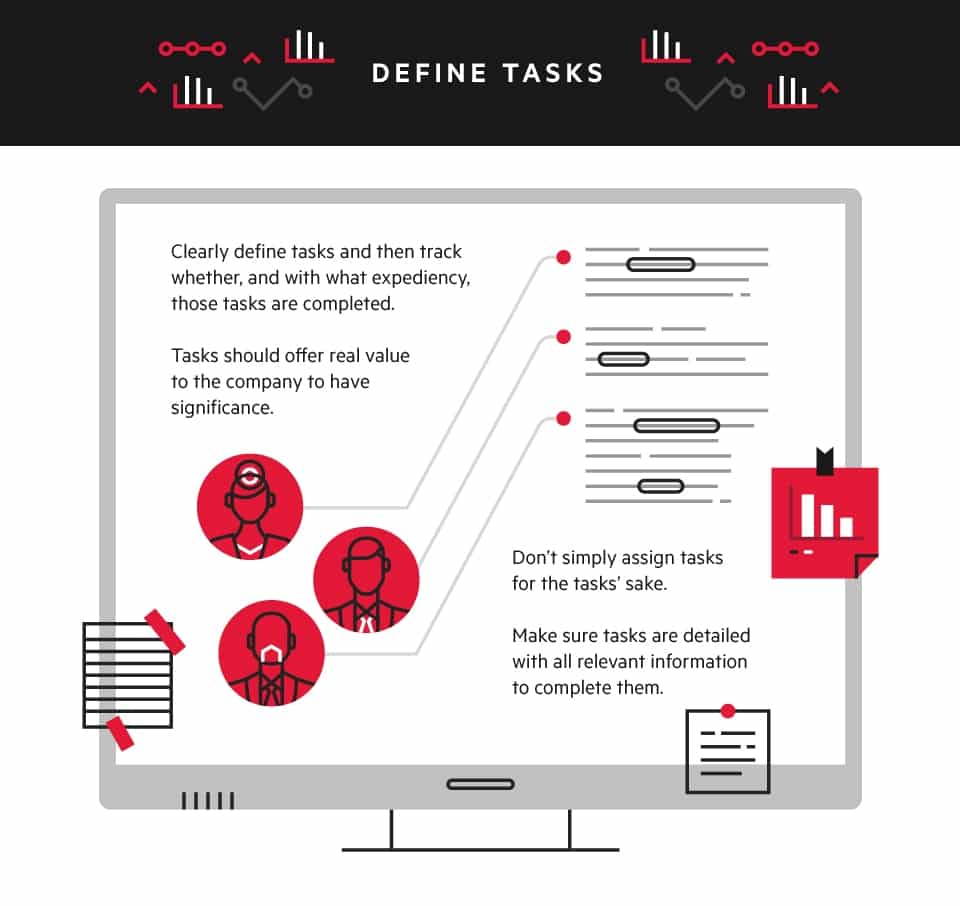 Once you establish a baseline set of metrics and tasks to measure productivity, it’s time to figure out how you’ll track these metrics over time. Presumably, your goal is for employees to meet or exceed the baseline on a regular basis—so you need to determine benchmarks that help you identify what qualifies as “exceeding” the baseline and help you notice if your employees stagnate in their roles.

Just as when you established your baseline metrics, it’s important to take a multidimensional approach to setting benchmarks. For example, you may establish a benchmark for X number of sales successfully closed, X number of professional presentations delivered, X number of software functions coded, etc. Then, throw in some subjective outcomes to get a better sense of the whole picture. That may include things such as feedback from customer satisfaction or peer surveys, or the team member’s ability to collaborate, think creatively, problem solve, and so on.

The important thing is to develop as broad a picture as you can and then use this information in a constructive way—not a punitive one. If an employee appears to be stagnating, that doesn’t necessarily mean they’re unproductive. It may mean their manager fails to communicate assignments clearly, another employee’s bad work habits inhibit their productivity, they’re a better fit for a slightly different role or something else entirely. Benchmarks provide a valuable data set, but it’s important to look beyond them to really understand why an employee does or does not maintain their productivity.

No matter what benchmarks you decide to move forward with, it’s helpful to assign a time period by which certain benchmarks should be met. Different benchmarks require different time periods ranging from daily to weekly, monthly, quarterly, and even annually. Establishing these timelines is essential because it allows team members to know how they’re being assessed and encourages managers to set realistic expectations for their teams. 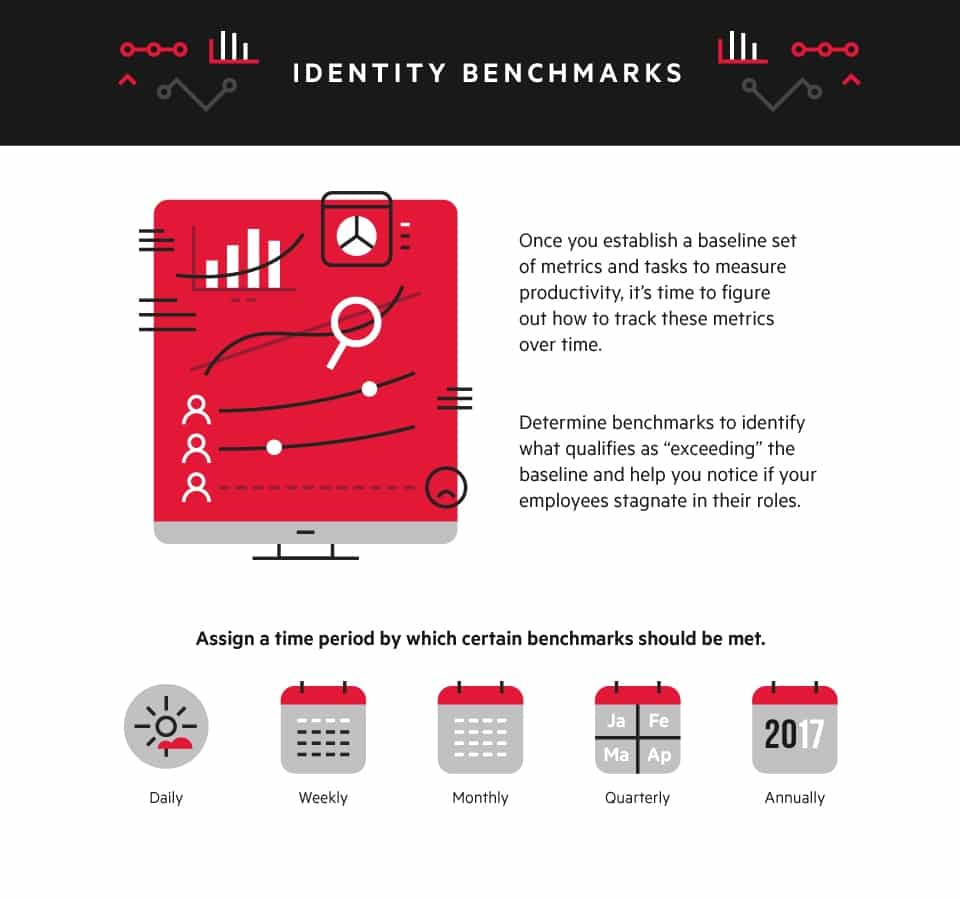 If you want your office’s productivity metrics to be valuable, it’s essential to involve your team members when crafting baseline metrics, defining tasks, and identifying reasonable benchmarks. After all, these team members have the most accurate sense of what it takes to accomplish a given task, what is a reasonable amount of work to complete in a given time in their individual roles, and so on. This helps explain why one study found that employees who participate in crafting their productivity metrics are most likely to demonstrate increased productivity over time.

Engaging your employees in this process also gives them a chance to identify the resources they need to thrive in their respective roles. The key is to listen when employees tell you what resources would enable them to do their jobs better and then invest in fulfilling those needs. For example, if an employee tells you they’d be more productive working from home two days each week or that a certain part of their job could be automated, give them a chance to prove themselves right. 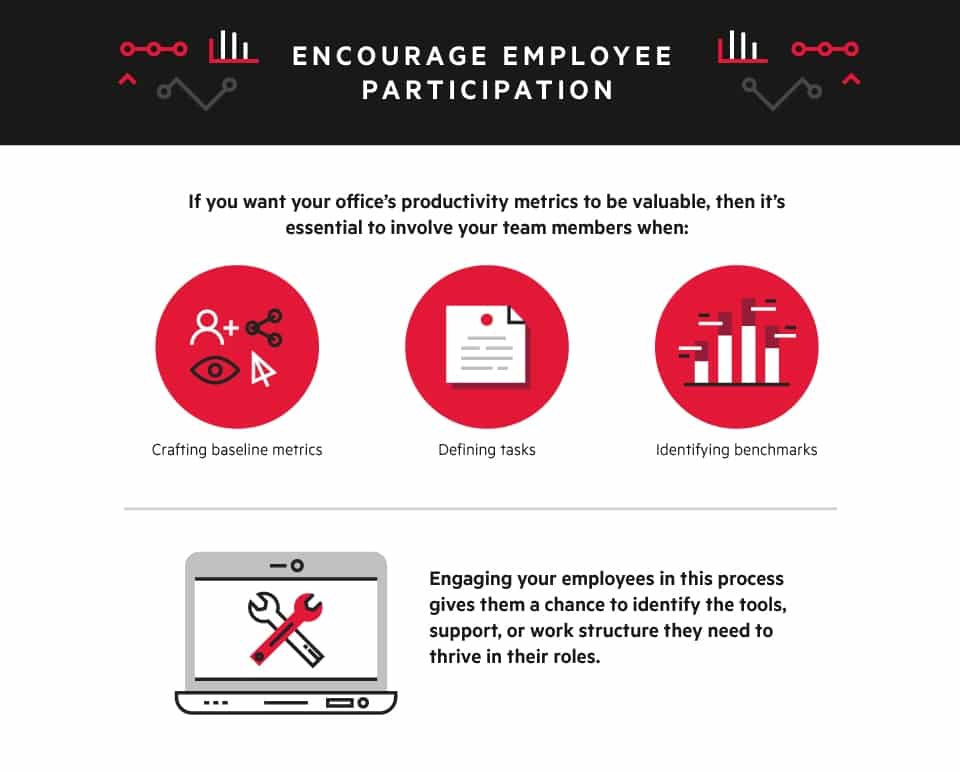 Regularly reevaluate how you measure productivity

Identifying and tracking productivity benchmarks isn’t a one-time thing. Instead, the way you measure productivity should constantly evolve depending on whether the baselines change, certain benchmarks have been achieved, key team members leave or new team members are hired, industry norms or standards shift, and so on. Because there are so many moving parts involved in productivity, it’s essential to continually redefine all these parts to make sure you accurately perceive and evaluate the bigger picture.

Attempts to track productivity shouldn’t feel like a draconian way to police employees’ every move. Instead, each of these steps should be taken with buy-in and feedback from your team members so everyone can understand their priorities individually and collectively. By creating a company culture that emphasizes respectful collaboration, assigns job duties to the individual performing them, and creates and executes effective processes, you’ll give morale a boost and empower your employees to be their most productive.

Thank you to Zerocater for this graphic.